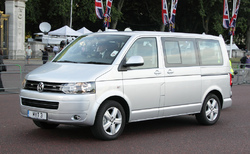 The intended use of a minibus lays an impact on the selection range of models. Main minibus parameters which are very important are the following:

Because of the lack of BMW minibuses in the market, there is strong competition between Mercedes with such models as Sprinter, Vito) and Volkswagen with its models Transporter, Crafter, Multivan and Caravelle.

Mercedes minibuses differ from the rest of the brands due to their high build quality, reliability, powerful engines and numerous comfort facilities. These features stipulate high start prices for the vehicles. That is why many people prefer used minibuses.

How to choose a used minibus

Best used minibuses are being put on sale by companies that specialize in direct work with huge European centers and manufacturers. Transparent history of the use of the vehicle, a wide range of working parts to choose between and decent pre-sales preparation – this is what the advantages of such companies are.

Before you buy a used minibus, mind that even a regular visual examination of the vehicle can reveal some drawbacks of it. You can check whether body parts have ever been replaced (wings or doors) while looking carefully at the body at various angles because replaced parts will have different paint tones. Careful examination of door gapping and other body parts can indicate to a road traffic accident, if this gapping varies in width on all parts of the body. The price of a minibus is also influenced by the condition of the interior (for example, the worn-out level of upholstery and rickety seats lockers).

Changed basic geometry of the vehicle after a car crash is the main drawback, and you should never purchase a vehicle with such feature. Visually it is difficult to notice, but examination at a good service center will be able to reveal this thing easily.

Reliable European sellers of used vehicles never adjust speedometer readout to any desirable readout. Nevertheless, the real number of operational kilometers can be estimated by footworn foot pedals and the condition of the engine, braking system and steering wheel.

The advantages of high quality minibuses are reliability, low fuel consumption by diesel engines and passenger convenience. The seat of an operator is ergonomically structured and is adapted for long trips, as a rule.

Of course, there are many contradictory reviews concerning automatic gearbox. Well-experienced drivers think that automatic gearboxes make the responsiveness of the vehicle lower, which is significant for inter-city trips, and increases the fuel consumption level. Engine lifetime augmentation is balanced with the prominent cost of automatic gearbox repair. Also, in many cases the total replacement of the gearbox is required.

Door parts (hinges, locks, handles and guidance elements for automatic doors) are vulnerable, and it is topical for many models, especially if the vehicle is and has been used much. On bad roads silent blocks and shock absorber supporting clocks are the first to go wrong provided that the vehicle is used often and under full load.