The scope of commercial vehicle sales serves as one of the indicators of economic growth around the world. It’s common knowledge that the need for vehicles goes alongside with the rising demand for the transport of goods. The commercial vehicle sector was badly affected by the recession between 2007 and 2009. But since 2010 the global economy has benefited from steady growth of machinery sales. The present-day fact is that people acquire goods and services in ever-increasing amounts, so the businesses that provide these products purchase more new and used vehicles to meet the growing delivery demands. Such a favourable general market situation in the sector (though there are differences by regions) entails significant competition. Besides, customers tend to be highly sophisticated. These factors in turn encourage sellers to search for winning strategies, which can guide the way to a better competitive positioning in the race for customers. Today, the tips on this point seem to be inexhaustible. But as always, example is better than precept. The true story of Kleyn Trucks, one of the heavyweights in the division of used commercial trucks, can be taken as a good example of business development, driven by thought-out solutions.

The Kleyn car company, which was established in 1919 in Asperen (the Netherlands) and relocated to Vuren in 1969, grew from a garage operation to an enterprise with a range of activities in the auto-mobile industry, specializing in trade in private cars, commercial vehicles, buses and construction machinery. Kleyn grew to become a diversified automotive company.

Following the first export to Persia (currently Iran) in 1974, international sales grew quickly. The year 1976 was the first year in which more than 1,000 vehicles were sold. In 1977, the first foreign branch was opened in Belgium and, from 1990-1995, Kleyn opened sales offices in Germany, Spain, Hungary, Bulgaria, Chile and Peru. Starting in 1991, the Kleyn family gradually began retiring from the company and shares were sold in tranches to the management board at the time.

New opportunities presented by the computer and Internet quickly changed the way in which business in second-hand trucks was conducted internationally. In 1989, the first digital photographic materials were used for the sales process. In 1996 Kleyn began using a photo hall in order to effectively respond to the rapidly growing significance of the Internet in the sales process. From 1999-2006, virtually all foreign branches were sold or closed due to the advent of the Internet and the resulting superﬂuity of this network of branches. In 2009, the last foreign business unit in Bulgaria was closed. Kleyn began to concentrate more emphatically on its core business, namely the purchase and sale of used trucks and vans. 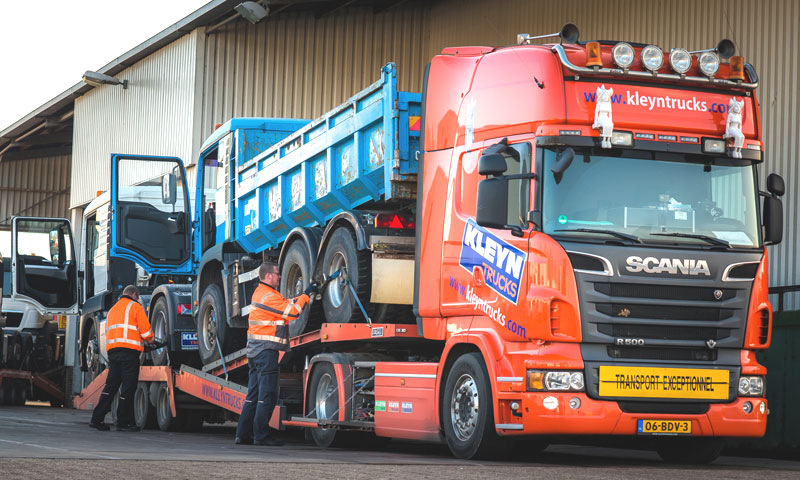 Today we have more than 100 skilled professionals, each with his or her own specialty and the expertise and tools to bring together supply and demand and, in doing so, ensure the right quality, delivery time, administrative handling and service.

Every year, around nine thousand trucks, semi-trailers, trailers and delivery vans change hands through the Kleyn Group. They are sold to buyers in around 158 export countries.

We are advertising on Truck1 since 2005 and have always been very happy with our corporation together!