Mercedes Benz is brand which is a part of the international automotive company Daimler AG with headquarters in Stuttgart (Germany). It is the thirteenth in the world in terms of total sales and the second largest truck sales. Daimler AG also produces buses, engines and provides financial services. The concern Daimler AG as well includes the following divisions:

Besides the above mentioned companies, Daimler as well owns stakes in BharatBenz, Denza, KAMAZ, Beijing Automotive Group, Tesla Motors, Renault-Nissan Alliance for the state in year 2013.

The history of Mercedes - Benz goes back to 1883 and 1890, when two independent companies were founded: Benz & Cie and Daimler Motoren Gesellschaft. Prior to their merger the Benz cars were produced under the Benz’s brand and the Daimler cars under the brand Mercedes. Since 1926, after the two companies have merged, the cars are manufactured under the name Mercedes-Benz. The history of Daimler Benz AG has started since that time. It survived physical destruction by allies bombing in 1944, in 1946 it has been recovered already.

After Chrysler bought the company in 1998 and then sold in 2007 the company became known as Daimler AG. However, the major machinery brand is Mercedes-Benz.

Trucks with cubic cabins started to be produced in 1965 in Weert. There were three versions with a total weight of 6 - 11 tons, 8-15 tons, 15-22 tons. From 1984 to 1998 the design of current generation trucks began to take shape. Since 1998 the following models have been being produced: Actros, Atego, Axor, Antos and Arocs. The main place of production remains Werth, Germany since 1965, where the final assembly of Actros, Atego, Axor, Econic, Zetros and Unimog is carried out. By 2012 – 2013 all the models have been upgraded and the world had an opportunity to see their second generation. 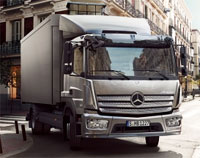 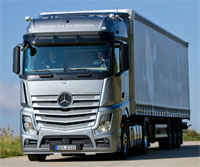 Model Atego is a light truck with a useful weight from 6.5 to 15 tons, it is equipped with four-and six-cylinder engines of 904 and 906 series, with capacity from 90 to 240 kW, five- and six-speed transmission.

Model Actros is a heavyweight model of Mercedes-Benz trucks. The model has been produced since 1996 with all kinds of upgrades, the 2nd generation of this truck was produced in 2011. The first generation 1996 – 2011 was equipped with engines 230 - 480 kW and the total weight was up to 41 tons. The second generation is equipped with EURO 6 engines with capacity from 175 to 460 kW and the total weight is up to 44 tons. The engines suit Euro 5 and Euro 6 standards for trucks and allow to save up to 7% and 5% of fuel consumption, respectively, compared to its predecessors. The trucks are equipped with automatic transmission Mercedes PowerShift 3.

Axor model is a medium-duty truck, which stands in line between Actros and Atego. It is equipped with six-cylinder engine with 170 - 315 horse power. It is designed to be used in both the urban and regional cycles. Its total weight varies from 18 to 26 tons. His special modifications Antos and Arocs came out in 2012 and were equipped with engines of Euro 6. Model Antos is applied in the distribution of heavy loads. Model Arocs is used to work in the municipal and agricultural services depending on the configuration of the attachments and special tires.

Unimog model is a four-wheel drive light-duty truck or literally Universal motor unit. It is designed for agricultural use, municipal and construction services, and military applications, as well as in other areas outside roads.

Model Zetros is a special truck for heavy off-road use. It is a four-wheel drive bonneted truck with wheel formula 4x4 or 6x6. The model was introduced in 2008 at the Paris Motor Show. The main customer was Bundeswehr (German armed forces). It is equipped with a diesel engine OM 926 LA with volume of 7.2 liters, its capacity is 240 kW and it has 9-speed manual transmission. It meets the environmental requirements of Euro 3 or Euro 5.

Model Econic is a modified cabine truck with a very low-slung, it was designed by Sachsenring AG for utilities or airports. The total weight is 18 to 26 tons. This model can be equipped with a gas or hybrid engine.

I like these motors becous i am a tipper driver