Cranes are crucially important for construction needs, only the ancient Egyptians could construct the famous Pyramids without these machines. Literally, almost any construction cannot be implemented without the assistance of a crane. Cranes are evaluated by two vital parameters - payload and mobility. Check out our of top-5 of biggest European cranes. Each vehicle is designed and built for specific tasks that an average crane simply isn't powerful or big enough to handle. 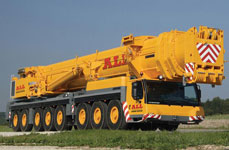 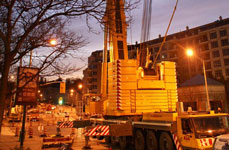 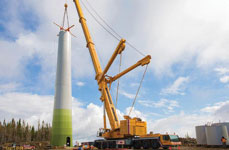 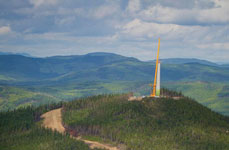 Meet all-terrain eight-axle mobile crane Liebherr LTM 1500-8.1, equipped with a 7-section telescopic boom that extends to 84m. Can you imagine how much is 84 meters? It is a 28-floor building! The maximal lifting capacity is 500t at a radius of 3m. This is a weight of 10 average military tanks. These figures became possible due to the jib-suspension system developed by Liebherr and known as 'Y-Guy'. It significantly increases the lifting capacity and provides support to the boom. The operating length is extended by means of 91m lattice jib. Thus, the LTM 1500-8.1 can serve as a headliner during large-scale construction activities. 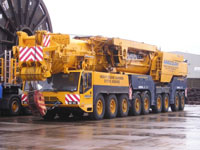 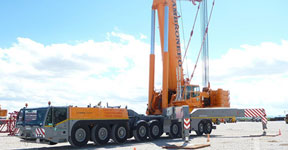 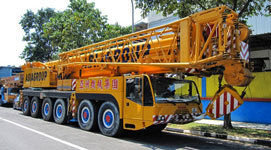 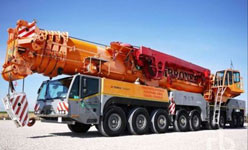 The Demag AC 700 represents the Terex brand and in comparison to the previous Liebherr, it is drivable even with full main boom.

This model is noteworthy due to its maximum system length – 149.5m!!! Keep in mind, we are talking about things that are able to drive! This is the greatest figure among all 8-axle mobile cranes. It is equipped with striking Sideways Superlift (SSL) Technology that provides additional lifting capabilities (the alternative to the Liebherr's Y-guy system). This optional attachment is used at medium and flat boom positions. The SSL has its own hydraulic cylinders what makes it quick in operation. And even fitted with the attachment this crane Demag is still able to travel on site. 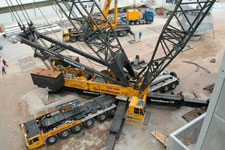 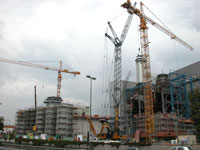 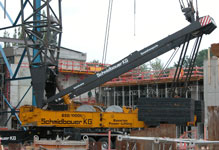 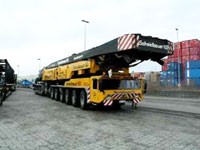 The Gottwald AK 850/1100 GT is a real old-timer among other representatives of this top. Since its creation in 1985 and till 2007 this mobile crane was the strongest and the most powerful in the world. At first it even wasn't approved to drive on the road. Then its weight was reduced and the superstructure was divided in 2 parts. After the upgrade it was eventually given the green light.

The 10-axle giant with load capacity up to 1,100 tons and a lattice boom of breath-taking 183 metres was especially honoured in high-rise construction. Schmidbauer Company owned and produced this big name while it was the best one. After 2007 the model was sold to Australia, where it is still in regular use. 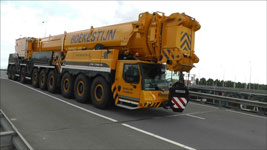 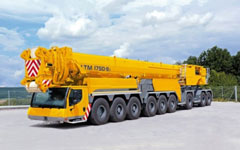 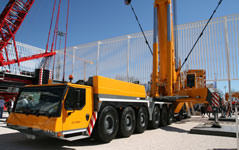 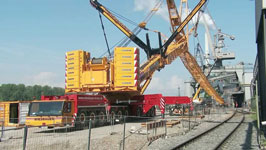 The LTM 1750-9.1 is the successor of the above-mentioned LTM 1500-8.1 in the Liebherr race for the most powerful mobile crane. It didn't become the one but it foreshadowed the appearance of the greatest crane from Liebherr (this masterpiece is saved for last). The creation of the LTM 1750-9.1 was driven by the innovative concept of a rapid set-up. There is no need to use an auxiliary crane to fit the rear support and it requires less than 10 minutes to install one of the rear outriggers. As a result, this model can boast the shortest erection time among the cranes of this size.

Moreover, in terms of mobility, transportability and road-friendliness this 750-t blockbuster doesn't lag behind its 600-ton fellows. The operational efforts are efficiently distributed among 2 engines: the vehicle is powered by the chassis engine while assembling and by the superstructure engine while working.

And can you imagine this behemoth steering as a crab? So, you should, as all nine axles are capable of crab steering. 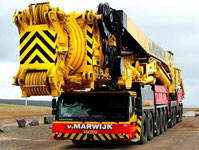 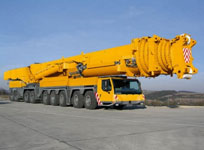 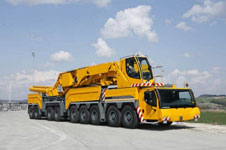 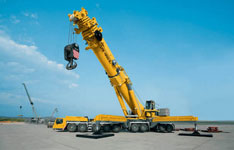 And finally, the best offer from Liebherr – the LTM 11200-9.1. As the name suggests, this crane is able to lift 1200t, thus having the greatest load capacity. Another top characteristic is the telescopic boom of 100m (one of the longest). This figure just suits the size of wind turbines, which are being repaired and maintained by means of mobile cranes. The boom is so huge that it requires a separate vehicle for transportation. So, the whole unit of this colossal crane includes 2 transports and, of course, the already familiar Y-guying system from Liebherr to increase the load capacity to the maximum. As for the chassis, each of 9 axles on the carrier can be independently steered.

All these "most" features are topical only for Europe nowadays. From the global perspective, they were relevant until 2012, when the Chinese technicians showed the world their variants of crane-monsters: XCMG "XCA5000" (1600t with the boom length of 105m) and Zoomilon "ZACB01" (2000t; 106m). But that's another story and probably for another time.

Great job. Gottwald had the verve. Why did it drop off so quickly as mobile cranes is what Terex don't want to elaborate. They shift to Gottwald harbour solutions or simply went off the rails?

Lmao,one also might think the author has some insidious agenda against Lampsons and other US/UK manufacturers. I realize that's a bit of German-orientied hype but still.

with all due respect what the heck it has to do with Gottwald? You are being plain wrong as Gottwald seems to be outdated and outdone by at least 4-5 Liebherr LTM mobile crane models.

Gentlemen, these are MOBILE cranes. These things can move themselves with speeds up to 80 km/h. Of course a portal crane has better criteria, but it is immobile.

no brainer these ones are baby cranes compared to portal and crawler big guns. still don't quite get where is xgc

that's a big fat lol, just have a look at dimensions of DEMAG СС-8800-1 taking part in constructing new safe confinement at Chernobyl

But not by travel speed ;)