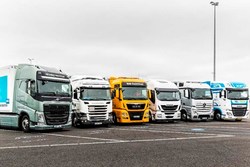 The first EU-wide standard–known as Euro 1–was launched in 1992, while emission regulations date back to 1970.

Catalytic converters became mandatory on new vehicles sold in the UK as Europe became aware of the need to decrease emissions from tailpipe. This injection of fuel on new vehicles was efficiently standardized.

Since then, we have gone through a sequence of Euro emission standards, leading to the present Euro 6, introduced for new approvals in September 2014

The regulations–intended to become more stringent over time–set acceptable boundaries for exhaust emissions of new cars and heavy-duty trucks sold in member countries of the EU and EEA (European Economic Area).

According to the EU, "Road transport air pollutant emissions are a major contribution to the general state of air quality in Europe," with other main sources being industry and power generation.

SMMT (the society of motor manufacturers and traders) says these standards have had a positive effect and claims that 50 new cars would be needed today to produce the same amount of pollutants that a vehicle built in the 1970's produces.

The SMMT has quoted the following figures in support:

Due to the distinct kinds of emissions produced by petrol and diesel engines, they are subject to varying standards.

In diesel, for instance, more particulate matter –or soot–is produced which led to the implementation of diesel particulate filters (DPFs).

However, the EU has indicated that the emissions of NOx from road transport "Have not reduced as much as expected. Since the emissions in actual driving circumstances (especially for diesel vehicles) are often greater than those measured during an approval test.

As pointed out by the UK government in December 2016, 34% of UK NOx emissions were accounted by road transport during 2015. Due to the increased contribution from diesel vehicles the atmospheric NOx reduction rate has slowed down.

Meanwhile, the average carbon emissions of new cars have fallen by more than half and will achieve the target average of 95g / km by 2020. CO2 emissions are related to the effects of climate change and subject to various regulations.

The following table shows the different Euro categories for new vehicle models approved after a specific date. The table is reproduced from that developed by the European Commission. Each car sold up to one year after the following dates should meet the required standards, but check directly with your manufacturer if you are uncertain.

If your car is older than all the dates listed below, it will not even be classified as Euro 1, so certain cities may charge or prohibit you from driving it at certain times.

European Emission Standards and their introduction

In July 1992, the first euro emission standards were introduced throughout Europe and the regulations were nowhere near as strict. That said, all new vehicles had been obliged to fit catalytic converters and Euro 1 had to move to unleaded petrol. In the case of diesel engines, only hydrocarbons and oxides with nitrogen were screened alongside particulate matter at that time. The regulations have been tightening up over the years and the limits have reduced.

Euro 2 decreased carbon monoxide levels and the combined levels for unburned hydrocarbons and nitrogen oxide and introduced a range of petroleum and diesel engine levels.

Euro 3 splits the petrol and diesel engine hydrocarbons and nitrogen oxide limits and adds a separate nitrogen oxide threshold in diesel vehicles. The warm-up period has been deleted from the test.

Euro 5's big news was to introduce Particle Filters (DPFs) for diesel engines and lowering limits across the board. Diesel vehicles were subject to a fresh particulate-number threshold for type approvals from September 2011 and fresh vehicles from January 2013. Every new diesel vehicle is equipped with the DPF that captures 99 percent of all particulate matter. Cars complying with Euro 5 norms emit an equivalent of one grain of sand per kilometer driven.

In September 2015 most new registrations implemented the sixth and current iteration of the Euro Emissions Standard. The allowable amount of NOx was cut from 0.18g / km in Euro 5 to 0.08g / km for diesels.

A focus on diesel NOx was the immediate outcome of a research related to these emissions with respiratory issues.

Manufacturers attempt to comply with the Euro Standards

To meet these new targets, some heavy-duty truck manufacturers, such as Iveco, MAN and DAF introduced Selective Catalytic Reduction (SCR), which injects a liquid-diminishing agent into the exhaust of a diesel vehicle using a catalyst. A chemical reaction transforms the oxide of nitrogen into harmless water and nitrogen expelled by the exhaust pipes.

The Exhaust Gas Recirculation (EGR) was an alternative technique used by Scania / MAN to meet Euro 6 requirements. Some of the exhaust gas is blended with intake air to reduce the burning temperature . In accordance with engine load or speed, the ECU of the vehicle helps to regulate the EGR.

Preparing emission standard for the future. Is Euro 7 on the horizon?

Currently, Euro 7 in Europe is little more than "chatter." There's a lot of lobbying and no formal proposal. Behind the VW’s ‘dieselgate’ scandal is a realization that the only way to prevent 'cheating' is real-world testing and tracking.

This ignores the fact that 'Dieselgate' was a VW car problem, with different Euro standards and tests, different and higher standards for PCV and HGV.

What is known as Euro 7 is being lobbied by towns and green movements who want cleaner air. Cummins thinks even cleaner systems can be built. It is therefore already working towards this objective.

Further calls for the EU to "very aggressively" improve the fuel economy at the Euro 7 were made by big fleet truck operators and clients.